"Perfect location for us to visit the 'henges' and Bath. Loved the quiet and the brook outside the kitchen window".

"The ideal getaway. Outstanding cottage. too peaceful for words."

"A fantastic place for a little getaway. Will recommend to all."

In fairer weather many visitors to Stable Cottage choose to relax in the garden by the banks of the stream and enjoy its calming babbling. But there are plenty of other activities if you prefer to get out and about.........

Pub: The George & Dragon is a lovely 15th Century pub with inglenook fireplace and beams displaying old banknotes and mugs. There is a good choice of food which is well prepared and always a good selection of local beers. The pub also has a skittle alley that can be hired.

Church: Potterne Church is Early English and of cruciform design. It was originally built in the 13th century and restored in 1871. The tower was added in the 15th century.

A well-known historic and nationally important listed building which dates back to the 15th Century.

Walking: There is an abundance of paths, bridleways and byways around the village. Some are ancient routes used prior to the building of new 'turnpike' roads in the 18th Century and include 'Five Ways' - an ancient junction. From Five Ways one may also walk to the nearby villages of Worton and Poulshot. Apparently, there are old notes that mention a Healing Well near here: 'In the highway, towards [Marston] in a ditch, a mile from the Devises, is a spring [and].... is near 'The Five Lanes', and its virtues are well known.' All around the village is evidence of the old methods of strip farming and the resulting 'ridge and furrow' undulations can be clearly seen in many pastures. There are several fresh water springs in the village. These include the "Dipping Well" on Duck Street and "The Pump" at the corner of Whistley Lane. The waters from these run alongside Stable Cottage and even keep flowing during the driest of summers. At the top-end of the village lie Potterne Wood and Grubbe Wood. From here various quiet paths lead down toward Potterne Wick, Easterton Sands, Urchfont and the Stert Valley. Heading east from the Cottage are footpaths that take you past Nine Hills which were formerly lime quarries (perhaps where the lime came from to build Stable Cottage and The Crofts?). From there one may take in excellent views looking down onto Devizes or up to the White Horse. This path then proceeds into the unspoilt and wooded Stert Valley. 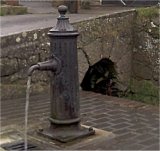 To the north of the cottage one may walk to the Kennet & Avon Canal and Caen Hill Locks. On the way you can pass the site of the Whistley Bronze Age settlement. Many significant remains were found at this site, some of which are held by Devizes Museum. This route also passes across the disused Great Western Railway branch line to Devizes. The embankment and track bed still exist. The railway used to rise very steeply up to Devizes Station and then into a tunnel right under Devizes Castle.

Cycling: For road cyclists Wiltshire has an abundance of small lanes such as Whistley Road. One can choose easy rides across the valleys or more demanding routes around the edge of and up to Salisbury Plain. Off-road cyclists can make use of the network of byways leading out of Potterne. Salisbury Plain also has many byways which include the Imber Range Path. Another invigorating route is up Roundway Hill and to Oliver's Castle Hill Fort and battle site. Bikes can be hired in Devizes.

Devizes White Horse: The best place to view the Devizes horse is from Etchilhampton Hill but from close up the sarsen used to make the eye is clear, and the view back across the horse to Roundway and Devizes.

Devizes: Our nearest town is just five minute's drive from Stable Cottage (or a leisurely 45 minute's walk across the pastures). Devizes meaning - a 'division' - was set up as a medieval market town between Potterne and other parishes. The market cross in the centre of the town has an inscription of a local tale warning of dishonesty. It says how Ruth Pearce, who lived in the cottage at the corner of Whistley Lane, was struck down as a result of lying. Hidden away around the streets of Devizes you will find buildings covering a period from 14th Century to the present. This includes many Georgian buildings built or faced with the local Bath Stone.

Wadworth & Co.: Northgate Brewery, Devizes. The brewery has a vistor centre where you can buy branded merchandise. Tours are usually possible, including sampling and demonstrations of barrel coopering. Or you can visit the stables to see the famous Wadworth shire horses. Or call in at a Wadworth pub in the town or local area to try the nationally renowned 6X or other excellent cask ales. Tel: (01380) 723361 or email sales@wadworth.co.uk

Crop Circles and Other Mysteries: This part of Wiltshire is at the centre of crop circle activity. Regardless of whether one believes they are man-made they are of interesting to all.

Avebury Henge and Stonehenge: Stonehenge is 30 minutes straight down the main road from Potterne. Less well-known, but in some respects more impressive, is Avebury Henge which is only 15 minutes away. Near to Avebury are also the West Kennet Long Barrow (an underground burial chamber that you can walk into) and Silbury Hill (a huge artificial hill).

Salisbury: This nearby city has a wealth of independent shops set within the beautiful city surroundings. There are a great number of medieval, tudor and stuart buildings that take you back to Old England, together with Salisbury Cathedral which houses one of the copies of Magna Carta, one of the foundations for modern Western law. Up on a nearby hill lies the original city of 'Old Sarum'.

Bath: The famous Georgian City of Bath is just 45 minutes by car.

Devizes Museum: Displays local finds and relics. Explains the history of Devizes and its surrounding area. It has one of the best prehistoric collections in Europe including jewellery, weapons and tools. Includes a good natural history display.

Antiques: Devizes, Melksham, Marlborough, Salisbury and Wilton have a good selection of antiques shops and warehouses between them. However there are also dozens of shops clustered in and around Bradford-on-Avon (25 minutes) and Bath.

Local leisure centres have Swimming Pool, Badminton, Squash, Gym Tenpin Bowling, Bowls. Peaceful Fly-fishing is just 5 minutes away. Nearby are several horse riding centres for hacks or riding school. There are many golf courses in Wiltshire including Bowood (15 minutes) and Erlestoke Sands (10 minutes).